In this episode of the Thought & Action podcast, we’ll discuss a tax free Roth conversion strategy.

More specifically, we’ll discuss converting your traditional, taxable IRA account into a tax-free Roth IRA account as an oil and gas investment, and if that decision is appropriate for you.

Fred’s role with U.S. Energy Development includes everything from tax planning to working with advisors and CPAs and helping with unique and different tax planning maneuvers for their clients.

Benefits of Converting a Traditional Retirement IRA Into a Roth IRA

This is different from a traditional IRA, which grows and has some tax incentives on the front end. In this instance, your future growth comes to you at ordinary income rates when you access it later on.

We call this the golden nugget of accounts. And there’s no age limit to this conversion. Ideally, the sooner you implement this strategy, the better. It’s really about future growth, so the more time that you have in front of you, the more attractive the strategy is.

That’s not to say that you can’t do this later in life, because a lot of people do. Typically, however, those with the most to gain by having more future dollars tax-free will benefit the most.

To develop assets in the energy world, you invest dollars that you raise because of how the tax law is written.

Energy tax law requires the assignment of a value to a fund before it’s fully developed. In other words, the assets aren’t really operating yet, and there’s no way to assign a value. For that first year, they’re 10 or 20 cents on the dollar. You have a short window before it goes back up. Then the assets start to produce, cash flow kicks in, and so on.

As an example, if you invest $100,000, the investment is valued at $10-$20,000 because the oil is still underground. It goes up in value as oil comes out. You convert the traditional IRA at its lowest point, and then the value goes up in the Roth account via the cash flows. And these are very high-cash-flow assets.

Think of a champagne bottle. When you open it, a lot comes out in the first moment. But by the time you put it on the table, there’s very little there.

Well, if that first moment lasted five or six years, a lot would come out. And you’re getting all of that as liquid cash. It flows to the account tax-free after the conversion. And you can invest it in other assets as well.

You save $32,000 in tax, and then the oil starts to produce. Your account is replenished or grows as that investment cash flows into the Roth account. And all of that gain is tax-free.

Your conversion bill is reduced by 80-90% with this strategy. That’s what people love about these — it’s not just another investment doing things similar to other assets that they already own. They’re able to take assets that they’ve not paid any tax on, move them, and grow them completely tax-free. And it’s all written into the tax code.

Tax Free Roth Conversion is in the Tax Code

These rules have been in the tax code for more than 100 years, and they’ve never been challenged by tax reform proposals or legislation. We actually put together a tax handbook for CPAs and anybody that wants to see the Internal Revenue Code.

These rules are part of the tax bill, which is important. It’s not a gray area. This isn’t a ‘Dirty Dozen’ or a listed transaction that might come back and haunt you in a few years. It’s been part of the tax law for over a hundred years.

Let’s go through the life cycle. You put in this $100,000, and it gets reduced to a $20,000 evaluation. You convert it and save that money in the tax conversion. And the first five to six years is where you’ll get most of your cash flow.

You’ll take about 80% of the asset’s cash flow in the first five or six years because these assets deplete by nature. They have what’s called flush production, and for the first few years, a lot of those dollars come out. They taper off over time by design, but they will be very strong for the first several years.

That’s the whole point. That’s what drives the internal rate of return (IRR). And reinvesting that same dollar can reduce the tax impact further and empower portfolio growth.

As an example, last year’s fund was in that 20-25% initial cash flow range. That was with $50 oil. Oil’s up a bit, and that could move that up or down. But we get very strong cash flows out of the gate.

Further, it’s not just all the tax-free growth, it’s the flexibility. Your required minimum distributions (RMDs) are gone. You don’t have to play that game anymore. If you want access to your capital, you can take out up to your contribution amount at any time, for any reason, with very few rules to follow. There are no penalties and no taxes.

People don’t necessarily go all in at once when they convert. Most of the time you’ll want to spread it out over time systematically. 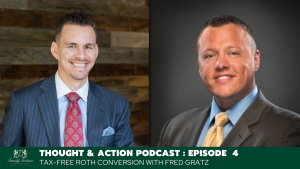 One of the biggest reasons is that each year in the oil and gas industry has its own asset life cycle. In other words, if you bought the S&P on one date versus another date, you won’t get homogenous returns. And the same is true in drilling funds. You’ll want to stagger that exposure and convert your account over time.

If someone has $1,000,000 in IRA, for example, they won’t convert the entire thing in one instance. You would probably break that up into smaller assets or do partial conversions over a few years or a decade. By then, you could get most if not all of those dollars in a tax-free bucket.

By spreading that potential tax payment out, you can spread the risk out and diversify your investments.

Disclosure: Fred Gratz and Family Fortune Financial work together and have mutual clients. While we’ve employed this strategy effectively, this is not a solicitation to make a purchase or take a specific action. Consult your financial advisor before proceeding.

Are you ready to maximize your investments and set yourself up for sustainable success? Click here to contact Family Fortune Financial now!

Advisory services are offered through Family Fortune Financial, LLC a d/b/a of Eudaimonia Partners, LLC (the “Advisor”), a Registered Investment Adviser. Services are only offered to clients or prospective clients where representatives are properly licensed or exempt from licensure. This website is solely for informational purposes. Past performance is no guarantee of future returns. Investing involves risk and possible loss of principal capital. No advice may be rendered by the Advisor unless a wealth management agreement is in place.